A newborn baby girl was found abandoned at the bottom of a six-foot wall in a trash-filled courtyard in Fuzhou City, Fujian Province on Friday, June 1, International Children’s Day.   She was lying next to her placenta with her umbilical cord still attached.  Although no one witnessed how the newborn got into the courtyard, it is believed she was thrown over the wall, as she was suffering from major injuries consistent with such trauma:  a fractured skull, bleeding in the brain, and injuries to her heart and lungs.   The neighbors who found her called the police, who took the infant to the hospital, where she is currently recovering.  Read the original report and watch a video here.

Reggie Littlejohn, Founder and President of Women’s Rights Without Frontiers, stated, “My heart goes out to this innocent baby girl, so violently abandoned.  I hope for her full recovery and that she will live a long and fulfilling life. When girls are selectively aborted or abandoned, the message is that females do not deserve to live, to draw breath upon this earth.  Gendercide is the most violent form of discrimination against women and girls.”

A subsequent report revealed that the “neighbor” who brought the infant to the hospital was discovered to be her father, claiming to have found her. It is not known if he has been detained. Abandoning a baby carries a jail sentence of up to five years in China.

Earlier this year, a woman from Guilin, China reportedly gave birth to a baby girl on the street and immediately threw her into the trash.   In 2015, a newborn baby girl in Beijing was discovered crying, having been flushed head first down a public toilet. 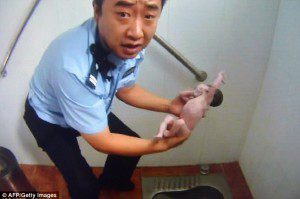 “For every report that makes it out of China,” Littlejohn continued, “there are countless unreported incidents equally heartbreaking.  These incidents powerfully demonstrate that gendercide still exists in China, despite the so-called ‘relaxation’ of birth limitations.   Perhaps the mothers of these abandoned baby girls were unmarried and fell into desperation, thinking they had no alternative.  Perhaps they wanted to keep their daughters but were forced to abandon them by the government or their relatives.  Unfortunately, we will never know.

“Regardless, the new rule that has been proposed is that coupleswill be allowed to have as many children as they want.  It will remain illegal for an unmarried woman to have a baby in China.  We demand the end to all coercive population control in China, regardless of the marital status of the woman.”

Women’s Rights Without Frontiers is ending gendercide, one baby girl at a time.  We have saved hundreds of baby girls through our Save a Girl Campaign.

In her footsteps: The Day of the Girl
Scroll to top