Dumped on doorsteps for being a girl: At least three daughters are abandoned in baby baskets outside Indian orphanages each month

At least three girls every month are dumped outside orphanages in India’s capital Delhi, as the city struggles with increasing numbers of children awaiting adoption.

Hospitals, orphanages and police stations across Delhi are overwhelmed with abandoned girls dumped in ‘baby baskets’ no longer wanted.

Adoption officials claim there are too many babies waiting to find forever homes, but a leading charity claim ‘baby baskets’ – where parents can leave unwanted children without fear of prosecution – are pivotal in ensuring the survival of these babies. 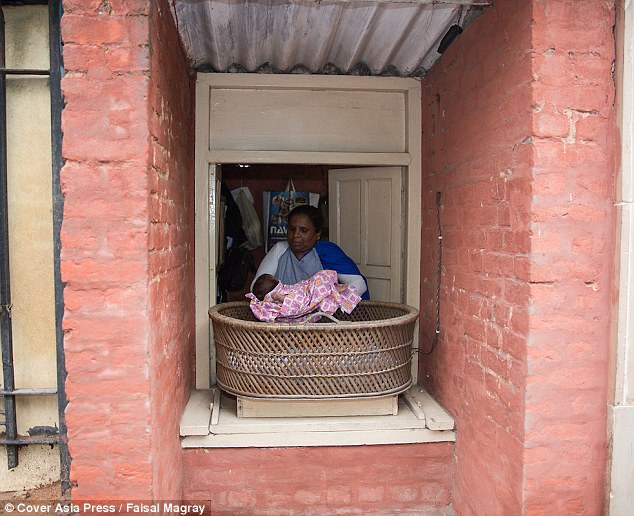 New hope: Three-month-old baby girl being picked up by Beena, 39, a caregiver, from the wicker cradle after being abandoned by her parents at Palna, a non-governmental organisation in New Delhi, India

At the same time, the statutory body responsible for facilitating adoptions is currently only managing a third of their annual goal of successful processes.

The Central Adoption Resource Authority (CARA), a statutory body which facilitates the process of placing children with adoptive parents, manages to arrange the adoption of 3,000 children a year. While they have 10,000 couple registered to adopt.

They’ve set themselves an ambitious target to increase the adoption figure to at least 10,000 annually by 2018-19.

Deepak Kumar, the CEO and secretary of CARA said: ‘The cradle scheme started to stop mothers killing their unwanted babies. Many women in India do not want to openly abandon their babies due to the stigma attached to being an unmarried mother.

‘So many women used to throw their babies in bushes and dustbins. Now, they can leave their baby without anyone knowing what they’ve done, with complete anonymity, and ensuring the safety of the baby. We want women to know they don’t have to kill their baby. There are a lot of people who would love to adopt so we want them to use the cradle scheme.’ 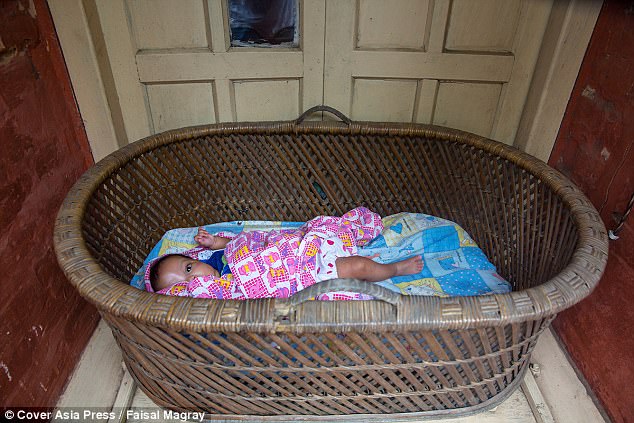 Saved: The abandoned children, especially girls, in India have found a new ray of hope with the baby cradle scheme 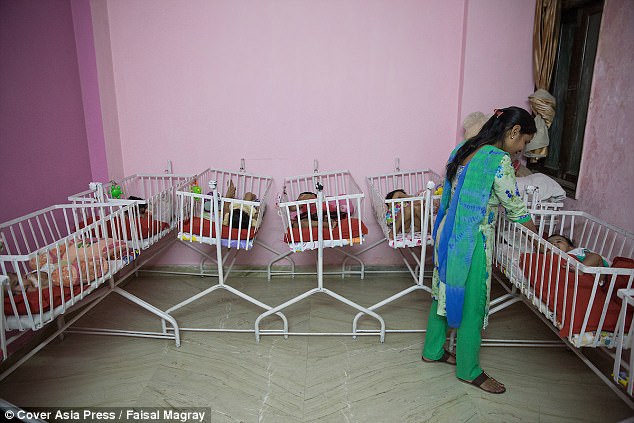 Girls not wanted: Officials in Delhi, India, say hospitals, orphanages and police stations across the capital are overwhelmed with abandoned girls 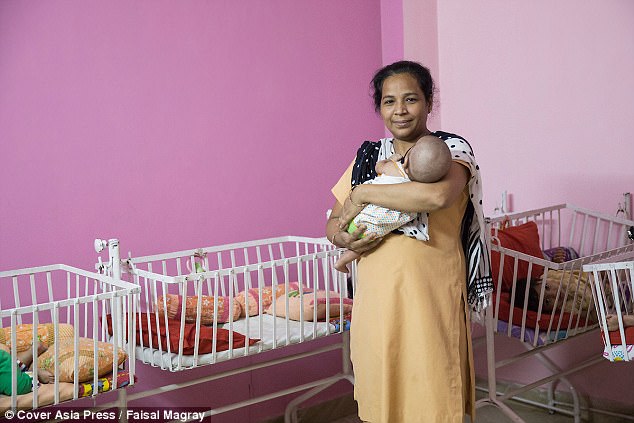 Palna, an adoption agency connected with the Delhi Council of Child Welfare (DCCW), has been caring for abandoned children for 40 years and receives at least three babies every month via the cradle scheme.

Lorraine Campos, the assistant director of Delhi Council of Child Welfare (DCCW), said: ‘We have around 10 children at the moment who came to us via the cradle. It works and we want more and more women to know about it.’

India is renowned for its female foeticide. A shocking number of baby girls are found dead or alive in bushes or even buried alive across parts of India. Babies in rural parts of India do not even see their first birthday due to malnutrition and harsh living conditions.

But a growing number of charities and children’s homes are implementing the cradle scheme. It’s an electronic cot that sits outside orphanages and hospitals and alerts staff when it has a new arrival. It also allows mothers to give up their baby without having to identify themselves. It has brought a ray of hope for vulnerable women in India, but also couples seeking to adopt.

Bincy Biju, 35, is one of the nurses who attends to a cradle outside Palna. ‘It’s a mixed feeling when I hear the alarm bell,’ she said. ‘I rush towards the gates as soon as I hear it but as I approach the cradle I get a sinking feeling. Sometimes I find a newborn baby and sometimes I find a baby a few months old. Every time another baby arrives it’s heartbreaking but it’s also like welcoming a new baby to the family. All the children here are like my own children and I love them all very much.’

The DCCW ensures each baby has no claimants, by working closely with the Delhi police and other agencies, before allowing adoption. On occasion, during the process some mothers come back for their baby but it’s rare.

Sadly, there are many more girls than boys abandoned and in desperate need of adopting in India.

Lorraine added: ‘Usually a boy is left with us if he belongs to an unmarried mother or has a medical issue. Girls are most often left as they could be a third daughter, or born into poverty etc. But it’s sad to say most abandoned children are born to unmarried women who are rape victims, minors or victims of incest. They all have their own – but genuine – reasons. It is a myth that only poor people abandon their children. People from all backgrounds leave their children here. Some children are left in a cradle with a suit case filled with branded clothes, which only hints to their background.’ 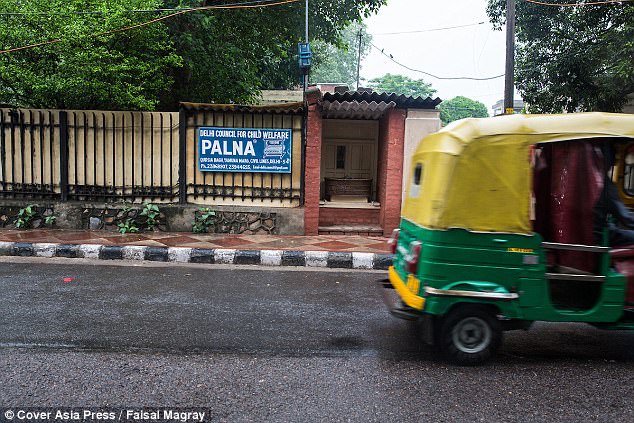 Entrance to Palna, showing the wicker cradle where the infants are placed. When the cradle feels the weight, a sound alarm buzzes in the office area and the child is collected 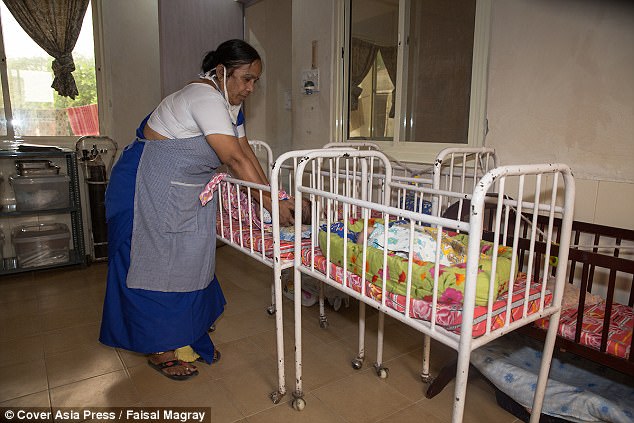 Shanti, 57, a caregiver at the Palna centre, putting the three-month-old baby girl in a crib after her medical check-up 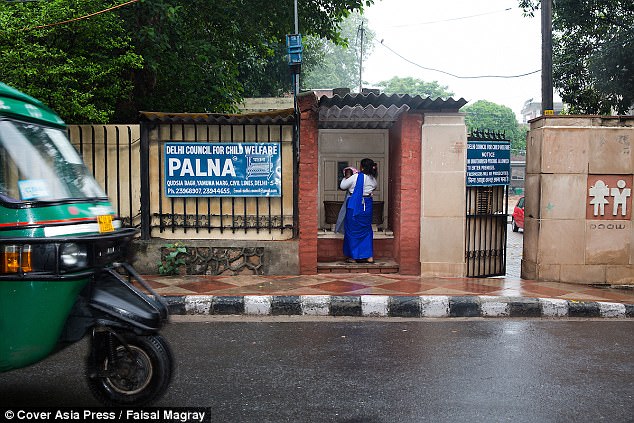 Baby baskets: The mechanical cradles enables parents to leave their unwanted children without the risk of being prosecuted

As well as girls, many of the babies abandoned are also mentally challenged.

Dr Mansi Thapliyal, a physiotherapist at the Palna centre, said: ‘Most of the mentally challenged toddlers here have no reflex system. They have no mechanism to move and they often get ignored by prospective couples but we stay positive and keep trying our best to get them a family too.’

Matru Chaya, is another adoption agency in Delhi, and is a huge supporter of the cradle scheme.

Seema, 42, who is one of the agency’s caretakers for the last eight years, said: ‘I’ve picked up babies from the cradle all hours of the day. The most emotional was a new born baby, left in the cradle at 2am, and born three months premature with her umbilical cord and drips still attached. I wondered what on earth had made her mother leave her. Today, she is a healthy child and already in an adoption process.’

Currently, CARA has 14,000 couples on the waiting list to adopt, and 20 of those are from Britain.

Deepak added: ‘Last year 14 couples from the UK adopted a baby. Those numbers should be higher and we’re working on that. There are many people who want to adopt and if women are aware of the cradle scheme at least there are couples who will give their baby a home. We do not want women to kill their baby. We’ll make sure they find a family who will love them.’